Corey Carothers is the executive director of Diakon Youth Services. He is married to Kelly and they have two children (and one on the way!). Corey also was a chef challenger in this week’s Dining with Diakon – Central Pennsylvania. Last year, he and youth services colleague Anthony Stukes won the 2013 Chef Challenge by raising over $12,000! Corey is committed to the mission at Diakon and goes above and beyond the call of duty to assist youths on a regular basis. Kelly is right beside him as a huge support. We asked them to share some thoughts with us ….

What is the best advice someone ever gave you?

Kelly – I wouldn’t say that the best advice I have received has come from any one person in the form of words. My “advice” is gleaned from observing those around me and choosing to take on the qualities and life choices that I respect and admire in others. From my parents, I have observed their strong commitment and love for each other; I strive to emulate that in my own marriage. From my in-laws, I have observed countless selfless acts and have learned to give from the heart without expecting to receive anything in return. From my husband, I have learned that life isn’t about me—it’s about the legacy I leave behind and the lives I touch along the way.

Corey – Early in my career, I confronted a student and asked him why he was always being a jerk. One of my mentors at the time told me, “Never confront the person; confront the behavior.” So instead I would ask, “Why do you act like a jerk?” This adjustment worked well initially with the students. It was less attacking and they responded less defensively. Over time, I began applying this method with others. Much of the time this has been effective and has allowed me to help build up people, as opposed to creating conflicts from which no one benefits. And I no longer use the term “jerk”; that was a separate lesson learned. My mentor was smart to confront one dumb thing at a time with me.

Kelly, what is it like being married to Corey? How do you support his work with youth services and his involvement with Dining with Diakon?

Kelly – He cleans out the dishwasher and does the laundry. What more can I say?

I have grown to respect and admire Corey greatly for the love and dedication that he gives to the kids involved in Diakon programs and to all of the people who work with him. At first, I did not understand the important work that Corey was a part of, but over time I became more involved with the Wilderness Center.

We have had so many amazing experiences over the years with the students who have come through the programs and the center. When our residential program was still in place, we spent every Christmas morning with the kids who were unable to go home for the holiday. Our tradition was to cook breakfast and give each child a journal. Our own children came with us and opened their own gifts after returning home later that morning. When the Flight Program began, we made a point of inviting the young men participating in that program into our home for family meals and in return have been guests at housewarming events and other milestones those young men have achieved with the help of the Flight Program.

What is your favorite memory of being at the Wilderness Center?

Corey – I worked on the weekends at the center for 10 years. Every Saturday afternoon, after all the work projects and counseling sessions of the day were done, we would have about two hours of recreational time. We would play game after game of staff-versus-student basketball games. When things were going really well, we would have dinner and then go out and play more after dark under the lights of the courts. Not many people can say they played basketball in the middle of the woods after dark with the locust, crickets, and owls all singing. As a young rural white guy, I often built some of the best relationships with urban black and white Hispanic kids by earning their respect on the court. I learned a lot about street life in the middle of our court in the woods. 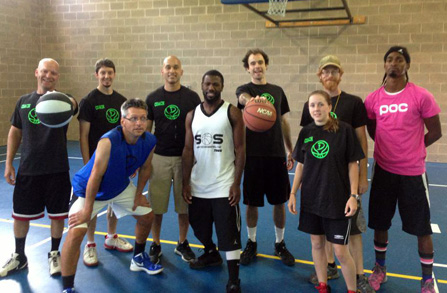 Kelly – Spending Christmas mornings at the center with our family and the kids who couldn’t go home for the holiday. These kids just couldn’t believe that they were important enough for us to spend our morning with them and we received so much appreciation in return. What could be a better gift?

What do you think it takes to be successful?

Corey – Hands down, I would say “hard work.” Up to this point it has always proven true in my life. I started out in a 3-month intern position at the Diakon Wilderness Center at the age of 20. Now, 18 years later, I am the executive director. I attribute this progress to working my tail off for our mission each and every day. I began directing my first program when I was 23. I had no idea what I was doing! I put my nose down, worked as hard as I could, learned as much as I could, and ultimately figured it out. I experienced many bumps and bruises along the way, but working through them has paid off.

Kelly – First, believing in yourself. Second, setting your intention and taking the actions necessary to make that intention a reality.

What are some of the biggest challenges facing youths today?

Corey – Sadly, that would be incompetent adult examples; not necessarily parents (but sometimes parents), teachers, relatives, friends, mentors, and so on. What I have found to be unfortunate is many influential people do not know how to guide young people into becoming self-confident, socially competent, moral-minded adults. Some people simply don’t realize they need to be taking the time and putting in the effort to teach these things. Others just don’t know how to teach these things to young people because they lack these skills in their own lives. It’s unfortunate, but true. That’s why providing the right type of role model for the youths with whom we work is so important.