While I hate clichés, sometimes thinking “outside the box” can be a great idea, even if occasionally a daunting task.

A few years back, we were tasked with developing a direct mail marketing-focused post card for one of our senior living communities. But think about your mail for a moment and recall how many such cards you receive weekly.

So the goal for any such card is to get picked up and at least looked at.

For some reason—perhaps that book by Roy Chapman Andrews of the American Museum of Natural History I read at night as a child, the blanket pulled over my head to avoid parental discovery, a flashlight held by my teeth—I thought: dinosaurs.

More than one tagline followed very quickly, including “Are costs eating you out of house and home?” and “Are health-care concerns tripping you up?”

But dinosaurs can be a bit frightening. So we needed a comedic, yet also mischievous one, to get our points across. A friend of my daughter’s is an amazing artist and was just beginning her career, so we turned to her for illustration.

Here’s the issue, however. I mentioned the concept to our account rep at a senior living marketing agency with which we were working at the time on various other projects and the response was, shall we say, lukewarm.

“Let us know how that goes,” was what I heard from other marketing professionals, who also were, as you can tell, less than enthusiastic.

Fortunately, the then-sales manager at one of Diakon’s senior living communities, both inventive and trusting, gave us the go-ahead. To be wise stewards, however, we did an A / B test … half the audience was sent Dino, the other half a more traditional direct mail. 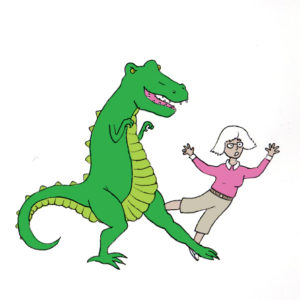 Not too many days elapsed until we heard from our sales manager: Dino had brought several people, direct-mail card in hand, to the senior living campus.

Well, not really. The sales manager sold the cottage but Dino brought the couple.

Dino had done his job. Just as thinking outside that darned box had.

By William Swanger, MA, APR
Senior Vice President
Corporate Communications & Public Relations
Because we review comments, they do not appear immediately. Please do not submit each comment more than once. Please review our comment policy.