A blog represents a compilation of various views on various subjects.

Sometimes, blog posts are educational, sometimes inspirational. At times, they’re focused on broad subjects with multiple opinions; at other times, they’re very personal, reflecting a particular view at a pivotal moment in life … as is the following post, written by Melissa Kindall of the Diakon Corporate Communications staff (and her daughter continues to do well).

The call that no parent ever wants to hear came Wednesday morning two weeks ago.

My 15-year-old daughter had gotten a ride home from field hockey practice with a friend. Her friend’s brother was driving when their car was T-boned by a truck.

My daughter took the brunt of the impact and for the first terrible minutes on the phone with the mom of the other kids, I didn’t know if she was alive or, if she was, how badly she was hurt. A few minutes later, rescue workers cut her out of the car and placed her in the waiting ambulance—she was alive, but I had no clue how badly she had been hurt.

I’m certain many others can relate to this situation. What began as a normal day took a terrible turn for the worst. My family and I are Christians. We don’t claim to be perfect. We pray. We read and discuss scripture. In those first few minutes after the accident, the fear that threatened to overpower me after that phone call was suffocating and it caught me off guard until I made the choice to cry out to God. My prayer was very simple as I drove to the hospital: Lord, help her. Oh God, help her.

God did help her and her friends. Miraculously, nothing was broken. My daughter had a concussion, a cervical sprain and lots of bruises internally and externally, but there does not seem to be anything that will cause her long-term or permanent injury. She was in and out of the hospital over four days following the accident. For the next week or so, she was in a lot of pain and in a neck brace. After seeing the damage to the car, it was difficult to believe that she even survived, much less with no major injuries. Her phone, that was in a protective case in her hand at the time of impact, ended up bent. I keep wondering how hard something has to be hit for that to happen…

It has been a roller coaster of emotions. I felt tormented at times by all the “what-ifs” and wonder over what I could have done to prevent this. At one point, she ended up back in the emergency room. Two days after the accident, she was experiencing bad headaches with numbing in her arms and legs. We had been in the ER for six hours and after running scans and tests, they decided to keep her overnight. It was nearly midnight. She just kept crying she wanted to go home and go to sleep. I wanted to cry with her. I felt frustration over the situation and fear that the doctors missed something majorly wrong the first time she was in the ER. And I started to question God again.

I know not all prayers are answered the way we hope; I prayed that mine would continue to be this day.

My daughter was wheeled to her room in the children’s hospital and as we were ready to enter her room, she pointed to a picture hanging outside the door. She said “that’s so cool, they hung up my picture for me,” and I had no idea what she was talking about.

Her name wasn’t even on the door yet. Then I noticed she was pointing to a drawing hanging under the room number. It was a frog on a skateboard that she had drawn as a class project four years ago; her school had sent in the pictures to decorate the new wings of the children’s hospital. I thanked the nurses for putting it there and they looked at me as if I was crazy!

They hadn’t put it there. It had been hanging there for four years and they didn’t have any idea that it was her drawing. Out of four floors of rooms, she had been assigned to the same room in which her drawing was hanging. 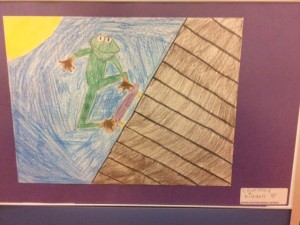 I couldn’t fall asleep thinking about it. I finally felt at peace. No more “what ifs” and no more wondering if everything would be okay. God just gave me a sign to let me know He wasn’t caught off guard by the accident and that my daughter would not only be okay, but that she would use her gifts to make others feel better, too.

She has a story to tell as a result of what happened to her. And I believe that story is filled with hope to encourage others!